Betty Grimsley first got to grips with Bach’s Cantata ‘Sleeper’s Wake’ over 70 years ago and she’s really looking forward to hearing it again in a concert she is thrilled to be sponsoring. ‘I studied it for my School Certificate in the early 40s’ said Betty, ‘and though Bach performed it just once in his lifetime, it became very popular – I have sung it with various choirs, including Sheffield Bach Choir. I’m can’t wait to hear them sing it in November’. 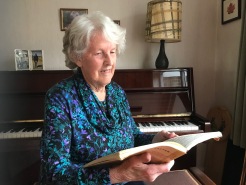 Betty, born in Manchester but a resident of Dore for many years, is no stranger to choral works, having sung soprano with first-rate choirs throughout her life, in whichever city she happened to be living. She started by singing alongside her sister with the Manchester Cathedral Cantata Choir and with the prestigious Halle Chorus under Sir John Barbirolli.

‘My mother was the musical one in the family’ explained Betty ‘She was very artistic, attending Manchester Art School just after Lowri had left. She was a soprano, and I have always used – and still have – her copy of Bach’s Christmas Oratorio – though it’s rather well-thumbed now!’

Following her move to university in London, where she trained to be a music teacher, Betty joined Philip Ledger’s Chelmsford Cathedral Choir and the London Bach Choir.

‘I learned such a lot with the London choirs.’ remembers Betty. ‘The newly-formed South London Bach Choir, under Dr. Paul Steinitz OBE, later became the London Bach Society, the first to sing Bach with period instruments and in German. They were exciting times!’

Betty joined Sheffield Philharmonic Chorus on moving here in 1969, singing with them for over 30 years, and with the Sheffield Bach Choir until her retirement. She still sings with her local church choir, and has played the keyboard at local services since the organist left some years ago. She is also a keen bridge player and U3A member, and has two sons and three grandchildren.

‘Sleepers Wake’ is a shortened name taken from the opening words which translate as ‘Awake, calls the voice to us’. Bach’s only performance was in November 1731, making it a great choice for Sheffield Bach Choir’s Bach Festival concert this November.

Also on the programme is the Christmas Oratorio, created in six parts in 1734 using music Bach had already composed, with new words to describe the key elements of the Christmas story. The Sheffield Bach Choir will sing the first three sections – the birth of Jesus, the angel herald and the adoration of the shepherds.

With first-rate soloists, the National Festival Orchestra and conducted by Dr. Simon Lindley, this will be a great way to kick off your Christmas in true classical style.

Read the article as it appeared in the Sheffield Telegraph

This entry was posted in Choir Blog and tagged Bach, Cantata, Christmas Oratorio, concert, Sleeper's Wake. Bookmark the permalink.
%d bloggers like this: