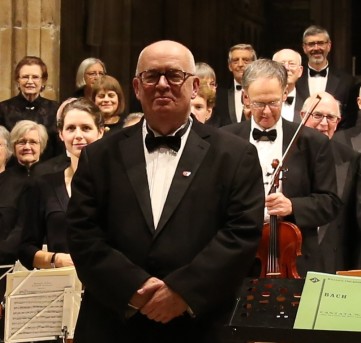 ‘It will be my 50th concert with Sheffield Bach Choir’ explained Simon, ‘My first concert was Mendelsson’s St Paul in 2009, full of show-stoppers but rarely heard, and a fine choice for what was the Sheffield Bach Choir’s 60th anniversary season. A marked contrast to my 50th concert with the choir, which features songs from the shows and John Rutter’s popular Feel The Spirit – always one to get people tapping their feet!’

Despite obvious expertise in church and choral music, Simon is equally at home with music from the USA, a familiarity augmented by regular trips to North Tampa, Florida to visit eldest son Nicholas, once a solo treble with the Bach Choir. ‘My two grand-daughters would feel right at home with the increasingly popular American Serenade by the late Donald Hunt, who wrote the orchestration specifically for the Sheffield Bach Choir’ said Simon. ‘It’s a celebration of the music of George Gershwin, Jerome Kern and Cole Porter, with individual numbers for smash hit shows such as High Society, Porgy and Bess and Show Boat. We’ll also present new arrangements of American classic songs specially orchestrated by our President George Nicholson, Professor of Composition at Sheffield University – as well as the Rutter of course – an infectious suite of spirituals featuring mezzo soprano Joanna Gamble.’

Simon is a highly distinguished organist with a long list of national positions with church music or organ trusts and associations, along with numerous awards and honours. For many years the organist and choirmaster at Leeds Parish Church, organist at Leeds Town Hall and music officer for Leeds City Council, half of his life has been based in Yorkshire where he has conducted numerous choirs including Sheffield Bach Choir and St Peters Singers in Leeds.

LET’S GO STATESIDE! Is the Bach Choir’s offering in support of the Broomhill Festival, which this year runs from 14th to 28th June and includes open gardens, a car boot sale, talks, a book sale, poetry readings, a litter pick, various children’s activities, a garden party and much more, together with numerous musical events. These include two lunchtime concerts, a Come and Sing version of Karl Jenkins’ Armed Man in aid of ASSIST on Sunday 16 June, Music for a Summer Evening at Westbourne School on Thursday 20 June in aid of the Bluebell Wood Children’s Hospice, and the Sheffield Sinfonietta playing Bach and Vivaldi in a free ‘Concert for Nepal’ on Friday 28th June.

Tickets for Let’s Go Stateside are available online at https://www.wegottickets.com/event/443664 or from Sheffield cathedral shop, or at the door.

Information about Broomhill Festival is available at http://www.broomhill-festival.org.uk/ and at Broomhill Library